Its just today that I stumble with the song Asar by Bipul chettri on Youtube which was released more than 5 months ago. The song caught me and I was like thinking where the hell was I for all those months. The song went on loop for at least 5 times. I could feel monsoon with the song and soon I saved it for the bored monsoon playlist. Words like "Sa ra ra", "Asara", "Lai bari lai", "ye kanchi/ o nani" and the rhythmic folk tune made me feel nostalgic.
Then I started searching for more songs from the singer Bipul chetri (whom I have never heard of) but I was already a big fan. I came to know he is a music literate from Kalimpong and already popular among Nepali music fans for his expressive words and impressive music/singing. Many came across him nearly a year ago, when he shared his song "Wildfire (Dhadelo lagyo)" on Soundcloud that got huge response and put him in the heart of many. The dark song inspired by the wildfires of Darjeeling creates full motion in your heart with the raging words and lofty music. Soon I found he was even nominated for three categories in this years Hits FM music award for this song. 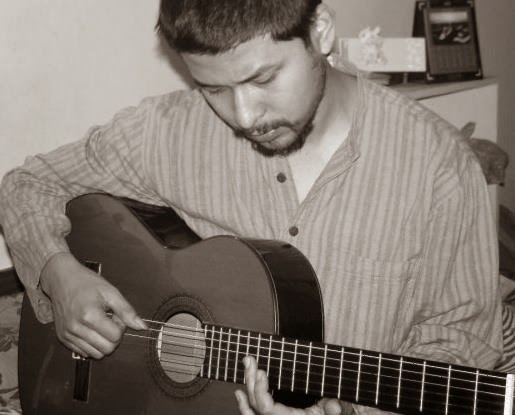 His latest offering is "Mountain high" (released one month ago), which has got Buddhist chants, tinkling of cow heard and same stylish singing. The mountain folk song puts you near to spiritual world and can even make you wanna dance to the beats. Best part of his songs are they bring smile on our face and makes you listen it on repeat, creating a lasting happy mood. Thank you Bipul for that. Keep on moving with your passion and make us happy.

After listening to the three wonderful songs from him, I think of buying the album which is not yet released and currently in the process of making. It is known that he had already named it to be "Sketches of Darjeeling" and he will be blending different elements from Darjeeling with the folk rock music in it. Apart from the wait for his album, I am even desperately waiting to listen him live, here in Kathmandu.

article Musical encounter with Bipul. has been completed in the discussion

hopefully the information Musical encounter with Bipul. that we provide can be useful for you to know the development of technology in the present
articles Musical encounter with Bipul. we have conveyed to you, if feel this information is useful and you want to bookmark or share so that more people who know please use link https://profsmythe.blogspot.com/2014/02/musical-encounter-with-bipul.html.